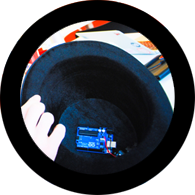 So, What do you do if you're a guy with a hat, a free afternoon and an Arduino Uno? You combine them of course.

I made the Time Hat as my hack day project for the good guys at HACKBMTH.
Are you in Bournemouth? Do you hack? Yes? Then HACKBMTH.

There were a couple of problems, both design and coding based, that I had to solve before the Time Hat coud become a practical(?) reality.

The code based problem is that an Arduino does not have a "clock" in the conventional sense that it is aware of something like 1531 or Twenty past three - It can't even do UNIX time. This is because there's no power supply built into the Arduino to keep a clock ticking after it's been turned off. But any computer needs some sence of the passage of time to function so an Arduino will count how many seconds have passed since it was powered on. Great! with that we can work out an offset to the next hour and then count down how many seconds until it's that time. The problem with that approach is that every time the Arduino powers down it either needs to be powered up at the same time again or the sketch needs to be adjusted and re-uploaded with new offsets. Not a perfect solution but this was a hack day project, We've all seen hack day stuff gaffer-taped together, so let's not judge.

The design problem was one that was tearing my hair out - Literally, It pulled my hair out. I didn't have any vibration motors lying around at the time but I did have a 9V motor. If you add weight to adjust the center of balance of the motor as it spins (In my case Blu-tak), the centirfugual force will cause it to vibrate.

Great! problem solved - except - unlike a vibration motor which encases the weight so it doesn't interact with objects around it, my motor was exposed to the environment. What was in that environment? My hair. I can tell you, Having your hair pulled out by a machine spinning very VERY fast hurts tons. Avoid if possible. My solution was to Gaffer-tape the motor facing upwards out of the hat. This way interaction with my hair would be less likely - Though not impossible.

Once these two problems were out of the way the rest of the build was pretty simple. My UNO was part of the ARDX kit you can get from Oomlout, These guys are fantastic and the kit has pretty much all the parts for the casual programmer. Part of that kit was bolts to affix the Arduino to a breadboard which I used to screw the Arduino to the hat. You wouldn't see these unless you were around 8 feet tall. Needless the say, The Tallest Man In Dorset would have been able to spot them, But no other mortal could. 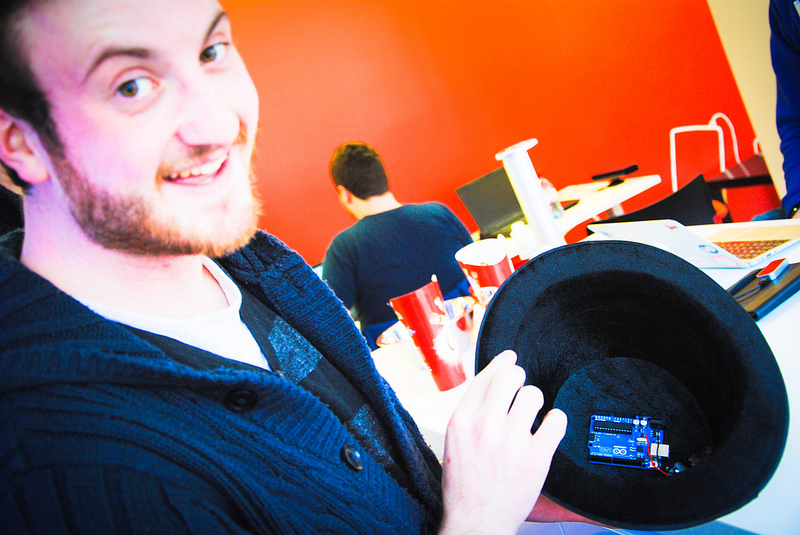