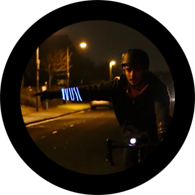 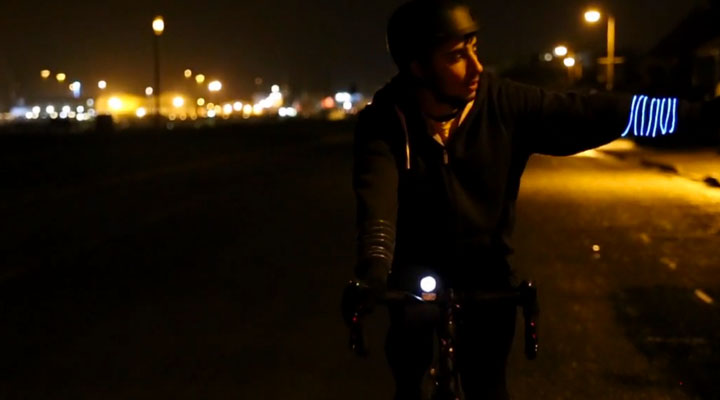 When it comes to a cyclist versus a car, the cyclist almost always comes off worse. So, is there anything we technologists can do to help out? Well, we think so. Wearables are everywhere right now, but you’d be forgiven if you had come to believe that the only form wearables come in were watch shaped – wearables can also take the form of circuitry and technology embedded into your clothes and that form is more interesting to us. Wearable technology should enhance what the user is already doing, not distracting from or adding to that task with a new form factor or way of operating. With that in mind we’ve come up with this…

How does it work?

Our hoodie has two gyroscopes, one wired into each of its sleeves. As a cyclist turns a corner and sticks out there hand to indicate, that arm lights up and blinks it’s electroluminescent wire just like a car indicator. There’s no buttons, no switch, no specific gesture to learn, you act as you always have and our hoodie enhances that action without any conscious thought on your part. 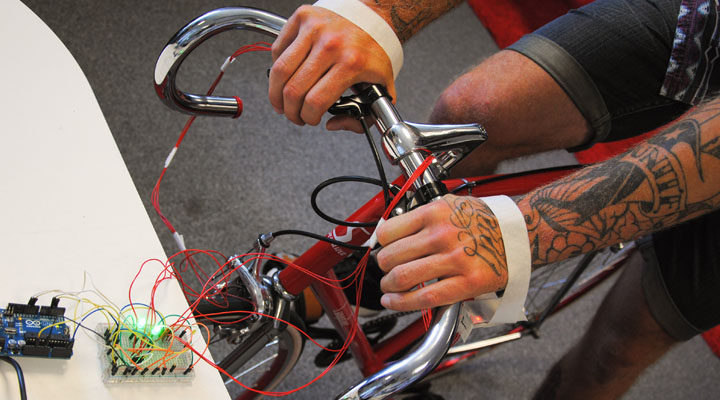 The lights that we’ve used on the sleeves are what’s known as ‘Electroluminescent’ wire which is basically a wire that emits light when a specific amount of power is run through it. Each arm has a 1.5m of electroluminescent cable wrapped around the forearm of the cyclist. Though we had enough cable, we decided not to wrap our lights around the full length of each arm because of the wear it would have on the wire, each person moves in different ways and depending on how that person indicates where they are going can affect the longevity of the cable. It’s because of this fact, that we decided not to use conductive thread to connect our parts together too, it just doesn’t wear as well as cable – also, conductive thread isn’t insulated, if it were to rain or you were to sweat quite a lot (a real possibility on a tough cycle) we run the risk of shorting the hoodie.

We use the two gyroscopes, one sewn into the sleeve of each hoodie, to detect when the cyclist is indicating a turn. When you first activate the hoodie, a calibration process begins. The user places each of their hands on the handlebars on the bike and as each arm calibrates the electroluminescent wire flashes to indicate that it’s ready for use, when both arms are calibrated they flash. This calibration time allows us to work out a reference point from which to figure out gestures for each arm, a zero point as it were. As each arm moves, readings are sent from our sensors to our Arduino and when we detect values that indicate the arm is an outstretched position, we make that arm flash.

We’ve used an Arduino as the brain of our device. The Uno is the device that if you’ve ever seen an Arduino, you’ve probably seen the Uno. However, wearable technology needs to be comfortable to wear and indiscrete where possible, so to avoid having a hunk of plastic digging into the small of your back as you ride along, we’ve used the Arduino Lilypad instead. The Lilypad is a smaller, thinner Arduino, designed to be used in wearables. It can do everything the Uno can in half the size.